I love talking about the AFL. In fact, in business much can be learnt from what we see played out on footy grounds across the weekend. Teamwork, strategy, comradery, skill, and efficiency to name a few.

Watching the grand final last year, as a Collingwood supporter, was an education in dealing with pressure and stress. When the pies kicked the first five goals to cement a handy lead, I thought we’d roll them with ease. But then, the West Coast Eagles took charge and pegged us back.

For the remainder of the game, right until the last few seconds, this cycle of dominance was on display from both teams. I’ll never forget the last few minutes of play.

The ball was fired into our forward 50 and Eagles defender, Jeremy McGovern, took a courageous mark over our forward. He booted the ball down the wing into the hands of their ruckman, who found high flying Eagles excitement machine, Liam Ryan further down the ground.

Ryan quickly played on and delivered the ball to Dom Sheed on a tough angle 35 meters from home. Such was the battle, a goal would put the Eagles in front with not much time left.

Sheed calmly strode in and slotted it. The Eagles were in front and went on to win.

When the final siren sounded it was assumed the Eagles were the better team. That’s debatable, they won not because of brilliance (although Sheed’s kick was good) but because they had the momentum at the right time.

In sport and business momentum, when used effectively and consistently, is a major driver of success and continued growth. But as Collingwood discovered, if you lose momentum it can be catastrophic.

Footballers only have to maintain momentum for a few hours across several weeks to be champions. As a small business owner, you need to develop a way to build momentum, keep it and make it work to your advantage longterm.

It’s a tough gig to build momentum behind what you’re doing. It takes time to gain but is lost in seconds. Having started and sold a business previously and being a keen observer of Aussie rules, here’s what I know about creating momentum that sustains you.

Use your ‘why’ to build momentum

Momentum is much easier to have if they know why you’re doing what you’re doing. Are you in business because you identified your current industry players are self-interested and you have a customer-centric approach?

Reconnect with your ‘why’ and use it as your inspiration. Make a point of articulating it daily and do it loudly! The more connected you are with your purpose the more your staff and, most importantly, your customers will come to believe it. If they buy into what you’re trying to achieve, an uprise of momentum will start to prosper and it can often be carried on by your customers. In many ways, this is what Seth Godin talks about in his book Tribes.

“Tribes are about faith, about belief in an idea and in a community. And they are grounded in respect and admiration for the leader of the tribe and for the other members as well.”

So if you want to build momentum, start with the practice of proudly reinforcing your ‘why’ to yourself, your team and your tribe.


It stands to reason that if a customer is lost or an important project deadline missed that pessimism in your workplace will set in. It’s human nature and will probably always happen, but as a leader, you need to acknowledge it but ensure it doesn’t drag down the mood of your team.

Negatives can be easily forgotten (but still learnt from) if you regularly celebrate the successes. I encourage my clients to make a point out of workplace celebration. I get them to outline several ways in which success can be achieved within their business (i.e. repeat customers, financial goals, team culture etc). When they hit their marker, it’s time for high-fives (and wine and cake).

Even everyday milestones should be promoted internally among your team. That can be as casual as an all staff email referencing the good work done by a team member.

With all the responsibilities of owning a business, successes are easily glossed over. The little things count in a day and age where staff and customers want to work with a business that has a quality culture. Celebrate the success to increase your momentum.

Momentum feeds off your personal relationships

How many times have you dealt with people who love to complain? It’s too cold. It’s too hot. I’m tired. I don’t like it. They’re a kill-joy and can become toxic.

In business, you need to be surrounded by people who pick you up, not drag you down. Being a small business owner and charting your own course is not an experience most will have. Yet plenty will offer the benefit of their ‘advice’.

Almost every successful person has had to endure taunts by others threatened at their potential. I bet you have too. Make a point of only having a fleeting association with these people, or end the association completely if you have the confidence to do so.

Overt criticism, complaints and the downtrodden are all baggage you don’t need to carry. Instead, find the people that offer encouragement, that know what you’re going through and can be supportive. Often people like this will boost your momentum without even knowing they did.

These are the people to surround yourself with. Although, you don’t want ‘yes-people’ either. Success often comes from being challenged by your tribe. It’s how they deliver the message that matters.

Soon after the 2018 Grand Final, Collingwood resigned themselves to their fate of having to start to rebuild momentum in order to fight for AFL’s holy grain once more. A small lapse in momentum resulted in wounds probably never healed. I love the Magpies, but I don’t want you to be like them when it really counts.

To build your momentum, you need a clear understanding of why you started out in business. When it gets tough, it will be the reason you continue against the odds.

To keep momentum, the journey must be enjoyable. So, learn from your mistakes and celebrate your successes. Everyone loves a party. If you achieve your goals, share it with your team and thank them for their efforts.

To continue the momentum, rid yourself of the toxic energy and negativity naysayers thrive on. Create a support network that benefits you and shut out dissenting and overtly critical voices to your mission.

Are you confident of building your own momentum? 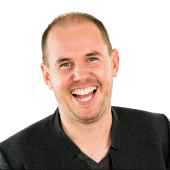 Tristan gives business owners and entrepreneurs the tools and support they need to simplify their workload, grow their profits, and reclaim their free-time. When your passion project turns into a six-figure business, it’s easy to get overwhelmed, to grow isolated, to lose focus on the next step. Your workload explodes. Your free-time evaporates. Your friends become distant, and your relationships start to wither. Unlike many business gurus, he actually built a business - from tiny startup to 7-figure turnover. He endured the highs and lows and learned through experience, so Tristan can offer you more than just biz-school buzzwords or vague advice. READ HIS FULL BIO